Intended both for young actors looking to find and prepare outstanding college audition monologues, and experienced actors eager to challenge themselves with the greatest roles in the English language.  Class is capped at 5; a pre-class interview will ensure that we start productively from the first day. Text work, activating the language, playing strong actions, given circumstances, and the world of the play, will all be addressed.

Ray Dooley has been a professional actor for more than 40 years appearing in productions on and off-Broadway, across the United States, and internationally.  At CSC Repertory in New York, Ray received a Village Voice Obie Award for Distinguished Performance in Peer Gynt, and at Vienna’s English Theatre played Father Flynn in the European premiere of Doubt.  As an actor with PlayMakers Repertory Company he has appeared in more than 100 productions, including roles such as the title role in Cyrano de Bergerac, Antonio Salieri in Amadeus (with the North Carolina Symphony), and George in Who’s Afraid of Virginia Woolf?. Ray’s solo presentations of A Christmas Carol and An Iliad, a one-man retelling of the Trojan War, remain highlights for PlayMakers audiences.  On camera Ray appeared in the daytime dramas One Life to Live, Guiding Light, Loving, and Search for Tomorrow, and in the films The Trial of Standing Bear, Stonebrook, Changeover, and the upcoming Trainhopper.  Ray has taught Acting at UNC Chapel Hill since 1990 and was head of the Professional Actor Training Program, ranked by the Hollywood Reporter as one of the top-ten MFA Acting programs in the country, from 2005 to 2018, helping to train dozens of students for respected professional careers. At Moonlight Ray has taught professional scene study and the Shakespeare Lab, and is currently available by request at Moonlight for coaching, scene work, and small-group workshops. 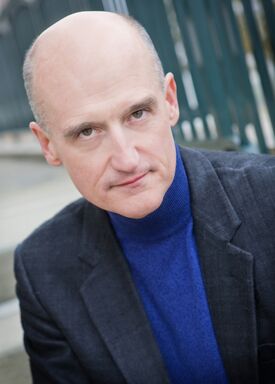 WHERE: INDOORS & IN-PERSON! at Moonlight